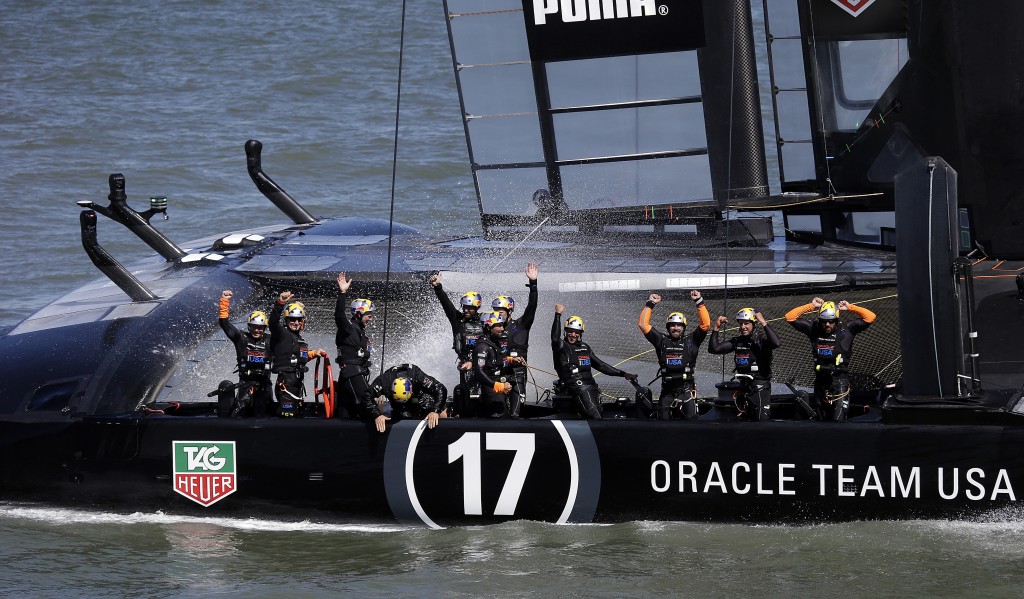 Today Oracle Team USA won the 34th Americas Cup, staging one of the biggest comebacks in sailing, and maybe sporting history, fighting their way back from an 8-1 deficit to win 9-8 in the best of 17.   It was an amazing success and show of skill, engineering excellence and perseverance, all things that go into a building a successful start-up.

I know both sides of this scenario, as I was part of the winning AC team in 1992, (America3) and my last technology company, Gist (acquired by Blackberry in 2011) was considered a solid win in the startup world.   I see many parallels between these wins and the Oracle victory.

Start with a vision
When you enter the AC, you need a solid vision and strategy on how you think you can win.  This usually starts with a hypothesis on the key areas of innovation on which you can create an advantage.  In sailing, this could include boat design, sail design/construction, weather planning, computer modeling, crew selection…and a host of other potential ways where successful innovation will create speed.  For example, in 1992, the team had a hypothesis that we could literally invent a new kind of sailcloth, made of carbon fiber that would be significantly lighter and stronger than then current standard.  As we look at this year’s AC72s, there were lots of areas of potential innovation with a new class (catamarans vs. monohulls), new sail types (wings) and even different types of sailing altogether (foiling).   And, in startups, you have the same approach; picking a market, considering competitive advantage or innovation and creating a hypothesis around what you might build and the edge it will create over your competitors.  In Gist’s case, we believed we could build a better contact manager, by connecting to your email inbox and using that to help define your most important contacts (people you email a lot).  And, using that list, we could surface important and relevant information about them from news, blogs and social content.  We believed this would be valuable for business professionals the world over, all a vision and a hypothesis at the beginning.

Build a great team
With a basic strategy and set of ideas in place, you go about finding the best people and experts in the world to design and execute.  This usually involves engineers, and the best ones are in short supply or are being snatched up by your competitors. For any of you technology execs, sound familiar?  In the AC, the pool of people is smaller and with the new catamarans and wing sails, expertise is even more limited than normal, so the competition for the top talent was pretty fierce.   Oracle had a big advantage, as they knew more about the rules and guidelines before everyone else (the advantage of the Defender) so they were able to snap up the best talent and get to work on building stuff.  Once you have unique talent, it’s harder for the other guys to innovate in the same ways.  Who you hire and when will be a critical factor on which things you can build and how quickly you might create an advantage.

Get solid funding
To win the AC, it takes a pretty big pile of cash.  By some calculations, Larry Ellison invested over 100M dollars to win and we invested over 40M in 1992.  That money enables recruiting for the best talent and lots and lots of experiments.  Like venture capital in the startup, capital allows you to tryout many areas, thus increasing the chances of a breakthrough.  Same same.  And, when you get good VCs involved in your deal, like I had with Paul Allen and Brad Feld, you gain confidence in hiring, in investing, acquiring… where you can to create gains.  I knew, that if we needed more cash to pursue some crazy ideas, we had their support.

Test and iterate
Most people only see the end result of the work, the event itself or the exit.  What they miss is the months or years of grinding it out, working toward a solution.  In startups, this is usually thought of software development, broken down into small iterations, we call “sprints”.  In these sprints, the team picks a focus area, innovates as much as possible and then “ships to production”.  In some areas, it takes many sprints to get to the full extent of and idea realized, but you approach it in small, focused chunks.   In the AC, this is the testing phase, which can last years before the event.  We (or the team managers) pick an area of focus (say the design of the keel/dagger boards).  We set up 2 boats (A/B) and we try different combinations to see which ones are faster.  To be accurate, the sailing team needs to keep as many of the other variables constant (wind, waves, sail trim, concentration…) to get to a result of which keel/dagger board is actually better.  The decisions are aided by lots of computer monitoring and number crunching, but it still takes the teams focused on every test, for weeks on end to make the most efficient progress.  This is just like sprints and A/B testing in software development. It takes “focused persistence” and a special breed of stamina and attitude.

Make big, hard decisions
Along the way you need to make lots of decisions.  Did we test this variable enough?  Can we move on?  Did the other guys make better gains in this area?  Can we afford to make another attempt and try something totally different?  Deciding what experiments are yielding early and potentially game changing results and which ones to cut/kill is a very difficult.  Experience, intuition, pattern-matching and a solid team all play into making these decisions quickly and in a way that the team supports.  Some are likely wrong or made too early, but the teams ability to make hard calls and unify around common goals and to charge forward with confidence is crucial to success.  In 1992, we had lots of hard choices, setbacks and rebounds.  For Oracle, they made a hard choice to change tacticians late in the game, but you could see the team (at least on the water) did not lose a beat, stayed focused and pushed on.

Learn from your competitors
Every good market has worthy opponents who, in their own way, are attempting to lead.  In some cases, you can determine where they’re focused and what success they may be having.  In other cases, it is very hard until you get to the starting line.  My latest startup, www.rivaliq.com is all about learning from your competitors.  During this AC, New Zealand came out with an edge.  They’d been the first to really figure out “foiling”, especially when at maneuvering the boat.  This was a design and boat handling innovation and they were fast.  They won 6 or the first 7 races and took a commanding lead. Most, including me, thought the lead was insurmountable.  Oracle went to school, studied what the Kiwis were doing and improved, changing their boat and their handling.  They got better every day and by the end, were significantly faster than Team New Zealand.  A team of lesser character or skill could have given up or given in, but they stayed focused and kept refining.  A common trait of great companies, they watch and learn, always improving and outlasting their competitors.

Update (9/30/13) Here are more details on what Oracle may have changed on the boat. Very smart – http://www.yachtingworld.com/blogs/matthew-sheahan/535348/america-s-cup-what-was-changed-on-oracle#lGobZYfDZ42bHg0e.99

Luck
All the planning and skill is important, but to be really successful, some things just need to go your way.  During this AC, several days of wind limits (too much wind to sail) gave Oracle more time to modify-race-test-modify the boat with only one (vs. scheduled two) race per day.  They got faster.  And, on day 13, New Zealand leading 8-2, needing only one win to clinch victory.  They were leading by a wide margin, the wind died and they couldn’t  finish the race before the 40 minute limit.  Seriously, that sucks? Lucky for Oracle, devastating for New Zealand.  It was a key turning point in the regatta.  When we sold Gist, there were many fortunate circumstances that aligned to make it happen, many of which we didn’t control.  It involved a good deal of luck.

Commitment
While my experience is correlated to doing a startup and winning the AC, Larry Ellison knows many parallels as well, referenced here in a solid article in Forbes and detailed in the most recent book The Billionaire and the Mechanic.  I sailed with Larry and the team on Sayonara too and he is an intense competitor.  He and the other members of that team made huge sacrifices, personal and financial and put it all on the line in an attempt to win.  It often takes that same commitment from the entrepreneur and the teams to make it happen when it looks like it won’t work, when the vision will fail and all the work for naught.

At the end of the day, it is about creating something so good, so fast that, even if you switched the crews, your boat (or company tech) would still win as we did in 1992, with Gist in 2011 and as Oracle did in 2013.  It’s exciting to be part of the history of the AC (winning and losing) and to be part of the lore of successful startups too.  I am fortunate, committed and sometimes lucky.

Congratulations Larry, everyone on Oracle Team USA and to all the successful startups who are demonstrating focused persistence toward victory!

Share this ArticleLike this article? Email it to a friend!
Email sent!