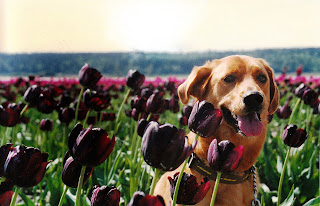 My brothers dog, Butch, died this week and I will really miss him. He was a great friend.

From my sister-in-law, Julie;

Butch came to us… wandering on the streets of Chicago during a cold winter weekend. We made a half-hearted attempt to find the owner by posting a sign. We took the sign down after Rob found rope burns around the little puppy’s neck, and declared that the owner didn’t deserve to have him back.

“Boulder Boy” loved hiking with us and climbing up on boulders, jumping from rock to rock. He liked to camp and run in snow. He was tentative near water, but he loved running along a beach. Butch wouldn’t really fetch a ball, but he would chase a flying tomato! He tiptoed through wet grass and preferred to stay on the sidewalk during rainy days. Catlike, Butch’s favorite pastime was napping in the sun, or in a little spot he’d made under the laurel or the tree by the back door.

He didn’t like men who wore hats that hid their faces, and really didn’t like the mailman approaching our house each day. But Butch was harmless, really… except for the one innocent squirrel that he caught just a few months ago. Or maybe it was already a dead squirrel that fell from a tree right on Butch’s head while Butch happened to be yawning? We’re not sure.

Butch invented the bit brigade. Often, when we fed him, he’d take 2 or 3 bits to a piece of carpet (one bit at a time) and sniff, study, dance around or even bark at the bits before he deemed them fit to eat. He’d eat the bits on the carpet slowly and then go back to his bowl to finish his meal. His favorite treats were biscuits and butter from grandma. Butch was so clean, he rarely needed a bath. His fur was sooo soft. He smelled like honey.

In the end, Butch likely had a brain tumor. We’re thankful that he didn’t suffer very long. He was a loyal, loving, fun dog. We will really, really miss our Butchie.

This site uses Akismet to reduce spam. Learn how your comment data is processed.

Share this ArticleLike this article? Email it to a friend!
Email sent!